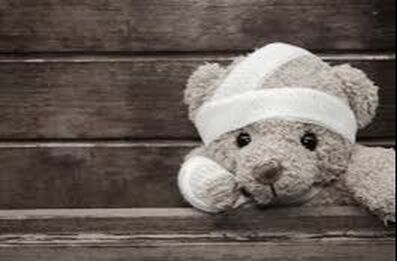 It wasn’t until a couple of months after starting therapy for anxiety that Susan (client’s name and personal details have been changed to protect confidentiality) told me about the cutting. Up until then we’d been working on ways her anxiety showed up in the present: mostly in work stress and relationship conflict. She reluctantly shared that she used to cut pretty often in high school, but hadn’t given in to the urge for at least a year — until the past weekend. She couldn’t explain why she’d done it; she didn’t want to cut anymore and doesn’t even think about it much anymore. She also shared that she tended to catastrophize and work herself up into fits of panic, even when she knew her feelings weren’t rational and she was being “silly”. She was ashamed and said she almost hadn’t brought up these things because she was afraid I’d think she was “crazy”. But I didn’t think she was crazy or silly; not at all. I asked her if there was any trauma in her history, and our work took an important turn.

Trauma-Informed Care (TIC) is a therapeutic philosophy more than a particular set of techniques. Therapists trained in TIC have learned that trauma is far more common than previously understood. Trauma was once thought to be confined to soldiers of war or victims of horrific crimes, but nowadays we understand that trauma is a widespread occurrence and it’s quite likely that a therapy client has trauma in her history. Trauma can cause problems like addiction, depression, anxiety; even relationship difficulties can have their roots in past traumatic events. To treat these issues without treating the underlying traumas is to miss an opportunity for deeper, more lasting healing.

So, what can you expect if you work with a TIC-trained therapist? A collaborative, strengths-based, solution-focused approach. Symptoms and behaviors are treated as coping skills, strengths in the face of difficulty, rather than as pathological problems. Susan’s cutting was something she used to do in order to cope with extreme emotions. Strangely, her anxiety also allowed her to escape traumatic situations and more painful feelings. Obviously these aren’t ideal coping skills, so we worked collaboratively to help her commit to new behaviors that were more safe and self-caring, while also acknowledging her resilience in managing difficult circumstances as well as she did.
Treatment focuses on recovering from the underlying trauma rather than addressing surface symptoms. Although Susan hadn’t seen how her anxiety and cutting stemmed from earlier traumatic experiences, once we were able to connect the dots she could see those behaviors as symptoms of a deeper issue, and we could focus our work on healing the root of the plant rather than the stem or leaves.

Empowerment in the now is a vital part of the therapeutic process. In treatment, Susan was able to learn new skills and behaviors that increased her resilience and helped her nervous system to stay calm in the face of triggers. Over time she rewired her system to be less reactive, which allowed her to choose how to respond to upsetting situations rather than feeling reactive and out of control.

By amplifying her strengths and focusing on trauma recovery, Susan came to know herself as empowered, resourceful, and resilient. If you think you might benefit from a TIC approach, reach out to Good Therapy San Diego. You deserve to know yourself that way, too.